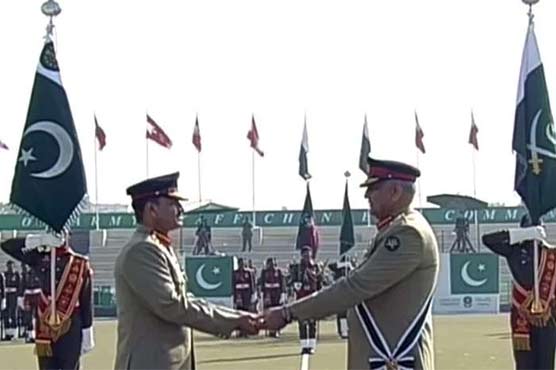 In the event, GHQ band gave a wonderful performance by singing melodious tunes of national songs and saluted the national flag. GHQ band also has the honor of representing Pakistan in Japan, Turkey and China.

The chief guest of the ceremony, General Qamar Javed Bajwa along with General Asim Munir, was greeted by the guards on his arrival at the venue, after which the ceremony was officially started with the recitation of the Holy Quran.

The ceremony was attended by Chairman Joint Chiefs of Staff Committee, Chiefs of Armed Forces, Senior serving and retired military officers, their families and Federal Secretaries.

On this occasion, metro bus and mobile phone services have also been stopped in certain areas in Rawalpindi while strict security arrangements have been made.

It may be recalled that General Qamar Javed Bajwa served as the 16th Chief of the Pakistan Army for 6 years, before that he was appointed in several important positions including commanding the Rawalpindi Corps.

General Asim Munir, who is also a Hafiz Quran reciter, emerges with a strong profile if his assignments are reviewed. He has been a close associate of the current Chief of Army Staff ever since he assumed command of troops in the Force Command Northern Areas as a Brigadier under General Bajwa, where General Qamar Javed Bajwa was the Commander X Corps at that time.General Asim Munir in 2014. After serving as Commander Force Command Northern Area, he was promoted to DG Military Intelligence in 2017.

After being promoted to the rank of Lieutenant General in October 2018, he was appointed DG Military ISI, where after serving for some time, he was appointed as Corps Commander Gujranwala in June 2019. General Asim October From 2021, Quartermaster General was performing duties in GHQ.

He was posted as Gujranwala Corps Commander before being transferred as Quartermaster General at GHQ where he held the post for two years.